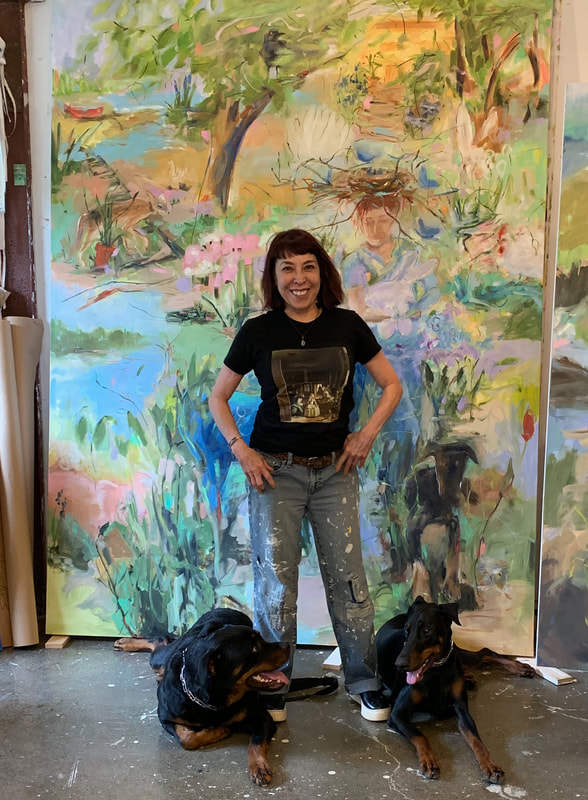 The artist in her studio with guardians Gucci and Coco and the new painting Sanctum, 2020, oil on canvas, 96" x 72"

​In 2013, Nine Gallery (Portland, OR) hosted a solo exhibition by Renée Zangara, entitled Ruralization, which referenced the then-nascent craze for backyard chickens. It was a catchy theme, au courant, whimsical but decidedly unironic. Zangara had been on my critical radar for a while, but this show made me sit up and confront the depth of her interpretive savvy. She painted chickens as Jean-Honoré Fragonard or John Singer Sargent might have painted chickens. Which is to say, her impeccable stylization imbued each of the fowls with a dignity, an aristocracy, a noble individual soul. Fragonard in the chicken coop—that’s no easy feat! To my eye, she accomplished it through a melding of sensibility and technique: the way the sundry feathers tapered into elegant wisps; the way the surrounding environs, in elegant teals, mints, and greens, telegraphed rococo refinement. A cockfight, as I wrote at the time in my review for Portland’s alternative newspaper Willamette Week, was rendered “as a flurry of jots and dashes that would read as an abstract painting, were it not for a beak here, some wattle there, and the odd claw.” The immediacy of the work was bracing, the style floating somewhere between Impressionism and Abstract Expressionism, with lithe, arcing lines that evoked the wiry spindles of Miró and Giacometti.

The artist’s background provides clues as to how she evolved this heightened sensitivity. She grew up in the Bay Area in the 1950s and 60s in a house that spilled over with music (her father loved jazz and played the trumpet). She was always singing, playing outside with her friends, and making hippie-style fashions after her mother taught her to sew. She earned good grades in school, helped look after her younger sisters and brother, did chores, and cooked dinner for the family nearly every evening. She was aware of design from an early age; one of her grandmothers lived in a clean-lined, modernist home, whereas her own household was appointed with Buddha statues and other East Asian arts and crafts that her father, who was in the Korean War, had sent back home; Zangara’s girlhood bedroom was decorated in a version of French Baroque, complete with a canopy bed.

​The radical stylistic contrast between these living spaces intensified the aesthetic vision that was steadily evolving within her. In addition, her mother and grandmother each had a highly attuned aesthetic eye and exacting attention to detail. They passed down to Zangara a highly specific way of looking at fabrics, colors, textures, furnishings, and accessories. This aesthetic focus became deeply ingrained.
When she started painting landscapes as a young adult, her parents proudly hung them among their Japanese scrolls and screens. As her interest in art and design bloomed, she was hired on to create visual displays for Macy’s and Crate & Barrel. From an accomplished watercolorist she learned techniques for painting in that medium, while at the same time taking night classes in art at San Jose State University, where she found herself drawn to the work of Goya, late Monet, de Kooning, and Rauschenberg.

In 1992 she and her husband, Alfredo Zangara, moved to Portland, where she enrolled in the art program at Marylhurst University, eventually earning a Bachelor of Fine Arts degree. She painted and drew enigmatic images of iris roots and trees, works that transposed the messy organicism of the natural world into the equally unruly tools of her chosen media. She thrived in Marylhurst’s heady atmosphere of engagement, inquiry, and constructive feedback. “I had no idea what art was until I was introduced to many things, like how to intentionally look, see, and evaluate,” she recalls. “I loved everything about it, all the critiquing going on. I felt like I was being reborn, cracked open, and shown how art could affect other people, that transmission.” She admired painters whose work had movement and bravado, painters like Joan Mitchell, Susan Rothenberg, Jim Dine, Joan Brown, and Nathan Oliveira. In their work she could study the traces of their decision-making processes left behind on the picture plane, the corporeal vigor of their paint application, which alternately directed the viewer’s eye or stopped it cold. This mode of boldly physical painting formed the basis of her own burgeoning style.
In her recent exhibitions with Vernissage Fine Art and Nine Gallery, as well as her ambitious paintings of all 50 U.S. state flowers at the Portland International Airport, Zangara has cultivated a growing expansiveness of painterly affect, a deeply personal shorthand for the whispers and sparks of spirit emanating from objects that may only be inferred. The transmissions that she speaks of having received in art school, she now passes along to the rest of us. Her gift makes the invisible visible, the unspeakable sonorous, peeling back Mother Nature’s veil that we might witness dually the nobility of the humblest weed and the humility of the noblest rose. She is a proponent for an egalitarian beauty and worthiness, and from her brushes flow paeans to the fecundity and rapturousness of all that surrounds us. ​

Oil paint is at the core of Ms Zangara’s creative practice. The artist lives and works at a confluence of river industry, woodlands, and an established working-class neighborhood. It is an active hub of international commerce, a shifting environment of wetlands and woodlands, and a host to a small kingdom of animals. This abundance of visual and subliminal stimuli provide constant inspiration for her work in oils, prints, drawings and installations.

February 2019 - February 2020, the exhibition of the 50 State Flowers is on view at the Portland International Airport, Concourse B
Contact maryann@vernissagefineart.com